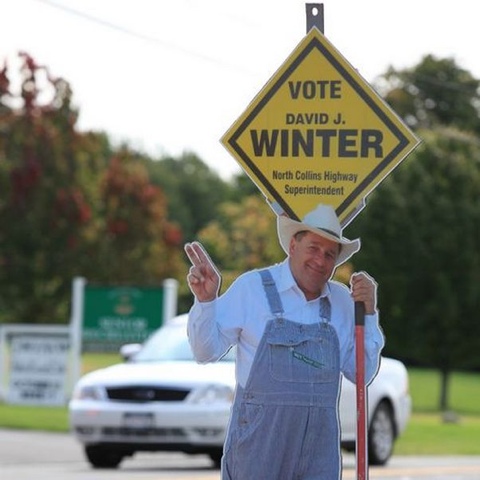 It's a different world out in North Collins. The Highway Superintendent, whose nickname is "Kissy", dumped liquid manure into the car of an Eden man, a physician.

Winter, 54, turned himself in Thursday morning to the sheriff's substation in North Collins, and was charged with second-degree criminal mischief.

Winter was first elected five years ago, and re-elected in November 2011. He is known for displaying color cutouts of himself in overalls and his trademark cowboy hat for his campaign signs.

This is one of those rare cases where an urban legend becomes actuality. In a popular urban legend, a jealous husband/wife dumps a load of cement inside their spouses' (or their spouses' lover's) car.  It wouldn't surprise me if a love triangle were at play in this case. With it being North Collins, we knew there would be cow manure involved. However, I would be surprised if farm animals didn't have a greater role in this story.
Posted by Blogger at 9:51 PM