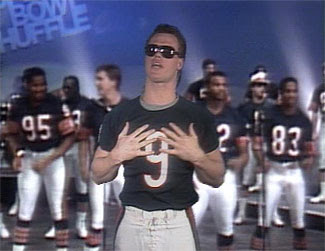 -I don't like Peyton Manning. Never trust a guy whose hairline advances an inch every year instead of recedes. And nobody really cares about your brother or your father, or your mother for that matter.

-I do like that this year's game is being played outdoors, in cold weather, on natural grass.

-I don't like halftime shows. I decided this after the 2nd half of one of the Bills' Super Bowls was postponed while they waited for the smoke to clear from the field.

-I do like the way Richard Sherman plays, but I think he should let his play speak for itself.

-I don't like those stupid commercials. You sit there, waiting for something funny to happen, and then it ends, and you say, "what the hell was that supposed to be about?" To think, people are paid big money to turn out that crap.

-I don't like Justin Bieber. I know this one has nothing to do with the Super Bowl, but it needed to be said.

-I don't like people who talk about their "squares" incessantly during the game. "If Seattle goes for a two point conversion and catches a field goal and  Denver kicks a touchdown, but misses the extra point, I'll win $100."

-I do like whoever the guy was who invented the Lingerie Bowl.

-I do like when players say ridiculous things after the game. Like, when a heavy favorite wins the game and one of their players says,"Nobody thought we could do it, nobody gave us a chance, but we believed in ourselves. Praise be to God!" You were favored by 10 points. Pretty much everyone thought you could do it.

-I do like it when Armenian Kickers try to throw forward passes in the Super Bowl...


2013 was a bad year for State Senator Tim Kennedy. He showed his true colors in three separate incidents, each one more pathetic than the next. Much like in 2006, when he sided with the Republicans on the County Legislature (after the anti-Lenihan Democrats told him he had to), Tim proved once again that he is incapable of being a leader, much less someone you can trust. Just check out these three examples, and keep in mind, this post is about issues, not name calling, and demonstrates how Tim Kennedy's morality is for sale every day in Albany.

1.) Why do they hold the Buffalo School Board election in May (when nobody shows up) instead of having it in November to coincide with every other general election?

I'll bet you didn't know this, But Tim Kennedy was the only member of the WNY delegation to vote in favor of keeping this election in May. From a Buffalo News article...

All Western New York senators voted for the bill, with the exception of Tim Kennedy. It's ironic because Kennedy previously co-sponsored the bill and voted for it twice.
His critics say pressure from the teacher's union caused him to flip flop. NYSUT donated $10,500 to Kennedy over the past year.

Holding a separate election in May is not only an incredible waste of money, but serves to keep voter turnout down. You know who will show up to vote on an 80 degree day in May? Buffalo teachers. And this is exactly why the New York State Teachers Union gave Timmy a $10,000 donation/bribe to keep the election in May. They don't want people to show up to vote, unless they know they are supporting their agenda. I have great respect for all teachers, but suppressing the vote is wrong, no matter who it benefits.

Remember, every other WNY Representative knew this was wrong, refused to take this bribe, and voted against it. Timmy has absolutely no problem selling you and your children out for the right amount of money. He's counting on the fact that most people don't pay attention to such things. Guess again, Timbo. The Blogger is back in town.

I'm not a hunter or a weapons owner, but I can tell you this piece of legislation is nothing but fluff. Reducing the number of bullets rural hunters can have in their chambers doesn't even begin to address the real issue. Drive by shootings are not caused by licensed gun owners in the town of Sardinia. They occur in the inner cities by unlicensed pistol-packing gang bangers. If Cuomo was serious about reducing crime, he would call for stiffer penalties for illegal gun owners and the people who sell them on the black market. There is no real effort underway to get guns off the streets.

And before the legislation was passed, Timmy assured 2nd Amendment advocates to their face, that he would never vote for the so called Safe Act. Needless to say, Tim was offered something by the Governor's office to go back on his word and surprise surprise, he did. I know at least one prominent South Buffalo attorney who is furious over this. Tim's mistake? These people from SCOPE will be organized and will mobilize against Andrew's little puppet in 2014. They will have signs on their lawns and will be manning the phones during the September primary.

Tim loves to tell local priests and elderly Catholics in his district that he is Pro Life on the issue of abortion. In 2013, Governor Cuomo was two votes short for his Women's Equality Act, a piece of legislation which includes the right to third Trimester abortions. You would think that no Pro Life candidate with any kind of backbone would support it. Wrong. After some prodding by Governor Cuomo, Tim actually brought this vote to the floor!
http://hudsonvalley.twcnews.com/content/news/634558/debate-over-abortion-re-ignited-with-cuomo-s-women-s-equality-act/

Now, this post is not about being Pro Life or Pro Choice. It's about how a politician can claim to be one and actually be hypocritical enough to vote for the other. Again, Tim is using the timeless scam of hoping voters simply won't notice. He would never let a small thing like INTEGRITY get in the way of his career.

I can guarantee there will be at least one other South Buffalo candidate this September. I'm also hearing reports of a Cheektowaga candidate emerging soon. Tim loudly supported fellow Yes-Man Chris Fahey during his quixotic campaign against Mickey Kearns (when he was told to). He also supported a Cheektowaga candidate against fellow South Buffalonian Patrick Burke (when he was told to). He angered many Hamburg voters with his negative campaign against Jack Quinn. He ran a negative campaign when he ran against Paul Sullivan a few years back. He leapfrogged over Mark Schroeder, to unseat Bill Stachowski, and ran a very negative campaign against him. It looks like this time, the cookies may be in for Little Tim. He's shown time and time again that he's willing to bypass doing the right thing, if it serves to further his career. The problem is, what benefits him in the short term, is going to cause his demise in the long term. And all the king's horses and all the king's men, won't be able to put Andrew's puppet back together again. The sound you hear is the noose slowly tightening around Tim's neck.