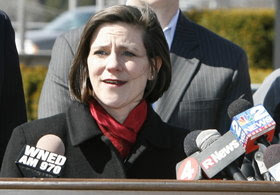 The New York Power Authority apparently hasn't been reading the papers or watching the news when it comes to the state's money problems. It was reported today by James Heaney that they recently hired political prostitute Elise Cusak for (I hope you're sitting down) a $77,000/ year part time job. When she served on the Power Authority's board, Cusak attended only 2 of the 19 meetings. This is another example of the Western NY political class rewarding a completely incompetant failure.

What about paying her $77,500 for a part-time job?
"I think the salary is justifiable," Kessel said, noting that she'll work 30 hours a week.
Yeah, that sounds fair to me. I know a lot of part time workers earning that salary.
State Sen. George Maziarz was incredulous over the appointment.
"Seventy-seven-thousand, five-hundred dollars a year? Part time? It's outrageous," said the Newfane Republican who heads the Senate Energy Committee.
Cusack termed the criticism "unfortunate".
"I would guess it [the salary] is on par with a lot of jobs out there [for people] trying to do great things for Western New York," she said.
Trying to do great things for the people of Western NY? You want to do something great for the people of Western NY? Get on your broomstick and fly as far away from WNY as possible.
I believe Brian Higgins, Mark Schroeder, Mickey Kearns, and anyone else out there needs to stand up and publicly question this hiring. It is outrageous and an insult to every taxpayer. Cusak: Go find yourself a job and stop hooking.
Cusak leaves board, lands lucrative job with Power Authority : City & Region : The Buffalo News
Posted by Blogger at 4:32 PM