Pink Snow in Babcock Could Be Algae (Blogger's Opinion) 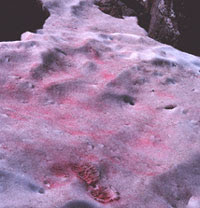 I read about this recently on a site I follow called Fark.com. Pink snow fell in the Philadelphia area just like we had in Buffalo. Some kid came out of his house and informed the scientists that he had looked it up on the internet. He believed it was due to an algae called chlamydomonas nivalis, more commonly known as watermelon snow. Later, scientists verified his claim.Could someone forward this article to the people investigating the pink snow in Buffalo? It sounds very similar to me but Buffalo's could also be from a company.
That's what I like about city neighborhoods. If this had happened in Orchard Park, there would be a town meeting called. The DEC would be called in to investigate. Schools would be closed and they'd be talking about making their kids wear surgical masks before they go outside. In Babcock, it was just a typical Wednesday. As long as the pink snow didn't affect Bingo at the community center, nobody really cared.
PhillyBurbs.com: Dec. 31, 2009 - day of the pink snow
Posted by Blogger at 10:56 PM