That's a Nice Bike You Got There 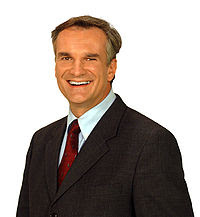 Here's a bizarre story from today's paper: Channel 4 weather guy Mike Cejka was involved in an unusual incident. Someone in Lockport noticed an intruder trying to pull the tarp off their motorcycle on their property at 4AM. After a brief chase, a police deputy pulled him over and drew his gun. The suspect, allegedly wearing only leather chaps according to police sources in Lockport, identified himself as the channel 4 weatherman. I never knew, while most of us were sleeping, local weathermen might be lurking on our properties looking for something to steal. Cejka can take some comfort in the fact that he's not even the weirdest weather guy in his own studio. As long as he's on the air, that title belongs to channel 4's chief meteorologist/stalker Don Paul. Cejka was charged with two counts of having some kind of midlife crisis, a misdameanor in Niagara County.
Deputy draws his weapon on weather forecaster Cejka
December 22, 2009,

A Niagara County sheriff’s deputy handcuffed and drew his weapon on Channel 4 weather forecaster Mike Cejka last week after an unusual incident in the Town of Lockport, the deputy reported.
The incident involved a brief car chase, during which Cejka drove his Jeep Grand Cherokee past a stop sign without stopping, sheriff’s officials said Monday.
Cejka, 50, of Clarence, was ticketed for failing to observe a stop sign, Sheriff James R. Voutour said.
The incident involved a homeowner on Old Beattie Road who called police at about 4 a.m. Dec. 14 to report that a man was trying to take a protective tarp off his motorcycle, which was parked in the driveway.
According to a report filed by Deputy Jonathan Andres, a Jeep driven by Cejka fled the scene in a “hasty” manner when the deputy drove up to respond to a 911 call. After a short chase, Cejka pulled his vehicle over on Rapids Road. The deputy drew his weapon and ordered Cejka out of the vehicle, according to a sheriff’s report.
Cejka identified himself to police as “Mike Cejka from channel 4 News” as he was being handcuffed, according to the report. Cejka said he had seen the motorcycle before and wanted to “take a closer look at it.”
He could not be reached Monday to comment.
The Lockport homeowner could pursue a trespassing charge in Lockport Town Court, the sheriff said. A violation is a non-criminal charge that carries a maximum penalty of 15 days in jail.
When asked to comment on the story, channel 2's MaryAlice Demler said, "Who cares about that guy? Did you know I'm from NT?" and then followed it up with an embellished laugh.
Deputy draws his weapon on weather forecaster Cejka*
Posted by Blogger at 3:39 PM