Paladino's Critics Use Obscure Loophole to Have Him Removed: Democracy Mourns 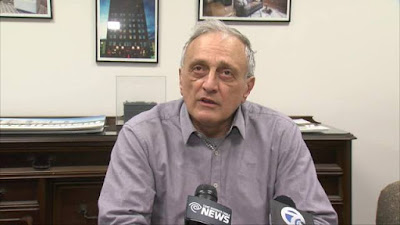 The Buffalo School Board holds elections every four years where the residents of specific districts can choose the candidate they believe in. The winner gets a four year term, unless the President of the Teacher's Union and other members of the Board don't like him or his ideas. Then, they can look for a loophole and have him removed without any input from his constituents. Welcome to George Orwell's 1984, better known as the 2017 Buffalo Public School System.

What Carl Paladino said to Artvoice regarding Michelle Obama was disgusting and reprehensible. The saddest part to me was that it wasn't even funny. As vile as his comments were, they were protected by the 1st Amendment. His critics knew this, so they found a loophole and contrived a scheme to rid themselves of the thorn in their side. In an actual democracy, the decision to remove Paladino would have been left up to the voters come election time.

Before Paladino became involved, the Board members would meet, talk about how great the Buffalo Schools were, suck as much public money as they could off the system, pad their own political careers, and do whatever Phil Rumore told them to do. The last thing these career criminals cared about were the students. If they did, they would have talked about the violence and disruption that occurs in many Buffalo schools on a daily basis. It was this anarchy in the Buffalo Schools that caused thousands to flee the city for a better education for their children. This was not the fault of the teachers. They do great work under oftentimes horrific working conditions. How many times have you heard someone say they moved to the suburbs for "better schools"?

Now, the Park (South Buffalo) School Board member will be handpicked by the corrupt Sisterhood and Union President Phil Rumore. Hardly democratic. Like him or hate him, Carl Paladino was elected by his neighbors and provided an opposing viewpoint to the status quo members of the Board. The reason they removed him is laughable and those responsible for doing so should be embarrassed with themselves today. Supporters and critics of Paladino should be alarmed. If a vocal minority doesn't like your representative, they can find some obscure loophole, go to Albany, and have him removed. Scary stuff for a supposed Democracy.