Holding the school board accountable 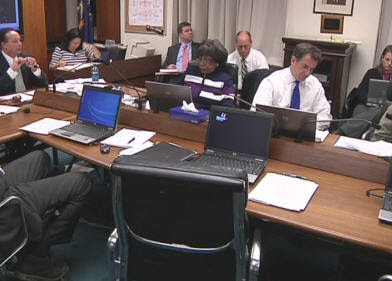 You might not always agree with his style, but Buffalo developer Carl Paladino is getting to the heart of a very important issue in our region, the failure of the Buffalo Public School system. Some city lawmakers joined Paladino today in a lively meeting on the current status of the Buffalo schools. In a rare show of unity, members of both races agreed some drastic changes in the school system were in order.

"I apologize to every kid, because we should have been paying attention to them a long time ago," Pridgen said.

Council Finance Committee Chairman Michael P. Kearns railed against the Board of Education for turning some schools into "dumping grounds" for students with special education needs.

"I'll tell you right now, my daughter is not going to a Buffalo public high school," Kearns said.

Buffalo has one of the lowest graduation rates among black males in the nation, said Education Committee Chairman Demone A. Smith. Only 31 percent of black males graduate, the eighth lowest rate in the nation.

It's ironic that Pridgen feels that way, since he was a member of the do-nothing School Board for several years. It's great that now, he thinks drastic changes are in order. What an epiphany!

To me, the first order of change needs to be instilling discipline in the students. They clearly are not learning it at home. Right now, in the grammar schools, it is the students who run the show. I worked as a substitute today at Public School #27. In one 5th grade class, I had four kids argue with me when I made them put away their IPods. Can you believe the nerve of me? Not letting them listen to their music while we were doing a reading assignment? Why isn't there a policy in place involving cell phones and other electronics? It's very simple. You have a lock box. Anyone caught with a cell phone or an IPod gets it confiscated. They get it back at the end of the semester or their parent has to come to the school to retrieve it. God forbid we hold the parents accountable for the actions of their kids. In this instance, I blame the principal. There appeared to be no policy in place at the school.

The Buffalo School Board meetings are a big sham. They show up and talk about how great everything is going and pat each other on the back. Meanwhile, none of their kids attend the poorest performing schools. A few of the schools in the city are very good, however, many are in complete and utter disarray. The two or three students in every group that want to disrupt the class or cause problems need to be removed. (Currently, they are not.) Alternative schools for these children need to be established. If that were to happen, you would be shocked at how much better the rest of the students would perform.

The politically correct are already criticizing Paladino for his idea of creating boarding schools for the most troubled students in Buffalo. Of course they are. Their kids go to Canisius, Nardin, Nichols, or one of the wealthy suburban districts. These are the same people who applauded Judge Curtin's busing mandate 30 years ago, and we all know how great that turned out! If we all just keep our eyes closed and cross our fingers, all the problems of the Buffalo schools will go away on their own. Paladino wants to hire minorities to work for his private company. However, many of the Buffalo Public School graduates he tries to employ cannot even fill out the application.

The schools need to get the parents involved, but they also must stop pandering to them. Stop giving them everything for free. Make them earn certain things, even if it is merely a symbolic gesture. Make some hard choices. Bring in a Superintendent with some actual ideas for improving things. Keep an eye on this issue, as I have a feeling some great changes are going to come from this debate. I'm thinking about showing up to a school board meeting. "Big Daddy" Williams has a short fuse. Maybe, he'll throw a punch at me and I can take a dive...