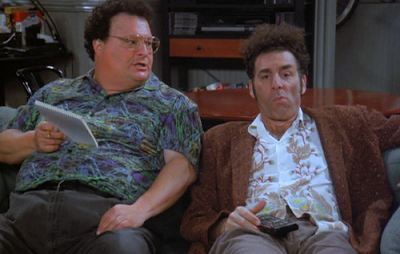 So you thought the Seinfeld episode where Kramer and Newman drive to Michigan from New York to double their bottle deposits was a joke. Think again. The problem for distributors is especially bad in Maine, where people from New Hampshire drive to illegally return bottles from their state...

In Maine, which has a more expansive bottle-redemption law than neighboring states, three people have been accused of illegally cashing in more than 100,000 out-of-state bottles and cans for deposits, the first time criminal charges have been filed in the state over bottle-refund fraud, a prosecutor said.

A couple that runs a Maine redemption center and a Massachusetts man were indicted this week for allegedly redeeming beverage containers in Maine that were bought in other states.

Thomas and Megan Woodard, who run Green Bee Redemption in Kittery, face the more serious charge of allegedly passing off more than 100,000 out-of-state containers - with a value of more than $10,000 - as if they had been purchased in Maine.

That's just the tip of the iceberg.

An estimated 90 million cans and bottles are fraudulently cashed in each year in Maine, costing beverage distributors $8 million to $10 million, said Newell Augur, executive director of the Maine Beverage Association.

I say Maine should give them a break. At least they're recycling.