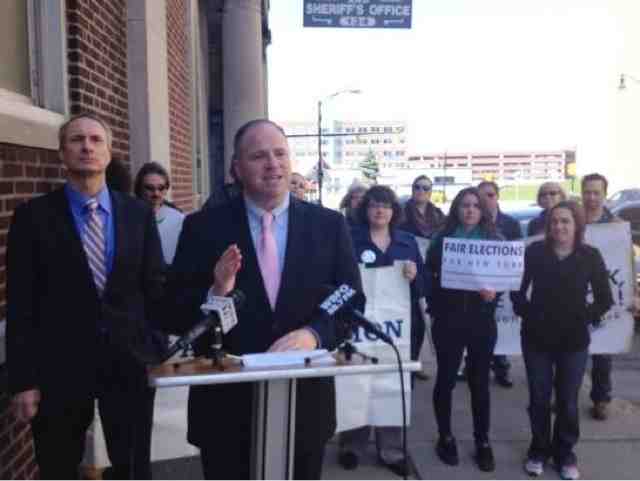 Our hypocrite of the week goes to New York State Assemblyman Sean Ryan. He's the idiot standing to the left of fellow idiot Tim "Horton's" Kennedy in the above picture.
You may remember Ryan came out against Erie County Sheriff Tim Howard last week for Howard's refusal to enforce Governor Cuomo's ridiculous Safe Act legislation. Ryan claimed the Safe Act was a great tool in the battle against battered women. However, Ryan was not standing up for battered women. He was standing up for Governor Cuomo. Anyone with half a brain knows this.
Now, it turns out that fellow Assemblyman Vito Lopez sexually harassed several female staffers and the settlement ended up costing NY State taxpayers $103,000. This settlement was approved by the Assembly Speaker which has many people calling for his resignation. But don't count Seanie Boy among them. You see, Sean Ryan is a defender of women's rights if, and only if, it is in the best interest of Sean Ryan, Sam Hoyt, Governor Cuomo, and the Democratic Party. He was on WGRZ yesterday dancing around the issue. All of a sudden, women's rights weren't as important of an issue. If you live in North Buffalo, you should be embarrassed with yourself if you voted for this imbecile. Sheriff Howard needs to out Sean Ryan for being a phony and a hypocrite. Unbelievable.